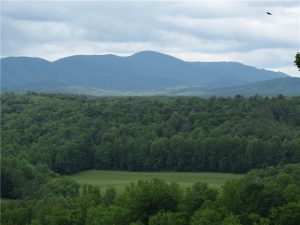 It was 1992. My business was growing, and I was itching to get out of my apartment and live in the country. The old saying, “You can take the girl out of the country, but you can’t take the country out of the girl” is so true. I was hungering for quiet nights, the smell of country, and the sound of birds chirping, so I went hunting for the area that I might want to live in. I was presently living in the heart of Fairfax, Virginia, and started my search within 30 miles of my church since that is where most of my friends lived. I went north, south, east, and west driving for miles for a total of three years several times a week searching for the right area. Every time I would go, I found myself gravitating to the area near Logmill Road, which was near the small town of Haymarket 30 miles west of Fairfax. It seemed that that area just had a hold on me, and since the only “mountain” that was anywhere near Fairfax was actually located in Haymarket, that drew me even more. So I prayed, Lord what would it be like to live in the country? Would it be safe? Would I like the commute?

Since I knew no one near that area, I thought I would rent a motel for a night near Haymarket and just see what the commute would be like the next morning. Right before I decided to make that move to rent a hotel room, I received a phone call from someone I barely knew. She was a fellow professional organizer and was calling me for a favor. She mentioned that she was going to Russia for three weeks and wanted to know if I would house sit for her. This would involve caring for her pets and plants. Since I hardly knew her, I thought at first that her request was strange, but I asked her some more questions and found out that she lived near Haymarket off Logmill Road! I jumped at the chance and found the commute to be doable. The nights were full of solitude, and the area felt safe. The Lord had confirmed that this area was in fact a place that I could live and finally be out of the city.

Several months later, our whole church had a week retreat in Pennsylvania. As I was walking to one of my sessions, a lady named Chris approached me and said, “Didn’t you give a seminar to my church in Haymarket in 1988?” I said yes, and she went on to say that she had attended my seminar and that my principles were working in her home. Turns out she was attending the same retreat. I found out that she attended my church, but I had never seen her there. As we talked she mentioned that she lived off Logmill Road. My ears perked up, and I asked her if she knew of any homes for rent in her area. She said no and went on to say that rental homes were rare in her neighborhood. Now get this. She never told me where she lived. She only told me that she lived on Little River Road which was near Logmill Road. I did not have her address.

Again several months went by and one day the Lord spoke to me very clearly and said get up and drive to Little River Road to look for Chris. I thought that was ridiculous as I didn’t know her address, but I went anyway. As I was driving down her street, I saw a “For Rent” sign. I drove into the property which was about 10 acres with a cape cod house and barn. I felt that the Lord spoke again to tell me that the rent on this house $1700, but I was to offer $1200. Now folks, the sign didn’t have any price on it, and I had no idea as to any prices of rentals in that area, but that was the figure that I got in my head. It was a beautiful property, and I was pumped. I contacted the realtor and asked what the rental price was. She said $1700 which included the barn for horses. Since I didn’t have a horse I asked her if the owner would rent it for $1200 and rent out the barn separate. She said an emphatic no! I asked her if she would ask the owner, and she said the owner was on vacation and out of the state and would not be back for another week. Now this day was a Sunday, and the owner would not be back until a week from the next day, Monday. The realtor said she would ask her when she returned.

I drove home and was content that I might actually be able to rent that place and live in my beloved country. The very next day, Monday, a week before the owner was to return, the Lord again spoke very clearly and said that I was to get up and drive to that property again. I thought, this is crazy, I have no need to return to the property. I have seen it. I can’t get inside the house and don’t want to make another trip because the owner is out of town. But I gave in to the Lord as His prompting was intense. I drove into the property and sitting on the front porch was a woman smoking a cigarette. I assumed she was someone looking at the property so I introduced myself, and she said that she was the owner. She had gotten back a week early from her trip and was just out at her property getting it ready to rent. After touring the house, I asked her if she would take $1200 a month and rent the barn separately, and she said yes. I was stunned!

How easy was that? After starting the packing to move, I found out that my friend Chris lived right next door. She had driven out of her driveway for months but had never seen the “For Rent” sign. Is God awesome or what!

“From one man God made every nation of men that they should inhabit the whole earth; and God determined the times set for them and the exact places where they should live.” —Acts 17:26