You are here: Home / Life Lessons / Clutter gets in the way of the life you want to live

In this installment of Principles to live by and to enjoy life more fully, I want to share a simple concept that may revise the way you look at clutter.

“At work or at home, clutter gets in the way of the life that you want to live.” 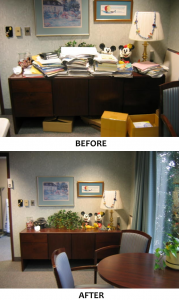 Almost always clutter is a combination of too much misplaced stuff and mental mistakes. After all, those stacks of unfiled reports, correspondence, and hardcopies on a desk or credenza didn’t just pop into existence! Those stacks and piles grew and grew and grew over days, over weeks, and for some of my clients, over years — and right  before their eyes!

In the office.   Recently, I worked in an organization here in Colorado Springs, CO. They hired me to organize 10 of their employees. The woman that hired me had lots of stuff, lots of files and a very large office. She dug right in, didn’t waste a minute of time and actually finished her office in a day.

She later wrote me a nice email in which she said, “With the support of Sue McMillin we spent the day organizing our offices and supply areas.  It was worth the time and investment.  Our Business Service team is worth $4.43 per minute.  If we lose 30 minutes a day (because of clutter or lack of organization or going through our work to get to our work), the cost to our company is $32,425.16 a year.  We are committed to dedicate ½ day quarterly to organize and purge our offices to maintain the order. I would encourage you to contact With Time to Spare to set up a training session for your team.”

Then a week later later she wrote me another brief email: “It has been 8 days and I still have a clean desk and have accomplished more this week than I normally do in a month. I am loving the system!”

Another employee later told me that she had no idea that her clutter was impeding her work but after she finished her office, she went to the Executive Leadership team and convinced them to hire me to do 30 more of their staff!

Clutter will rob you of productivity and cost your company money. Hiring an organizing consultant gives you a return on your investment, usually that same day. What other type of consultant can promise such a return on investment?

In the home.  Why do many homeowners put up with clutter and mess?  Sometimes the clutter becomes so familiar to them that they completely overlook it.  They simply don’t see the problem.  But, when that clutter starts to get in the way of the life you want to live then it is time to declutter and organize.

I knew a family that wanted to pursue adoption of another child, but they knew that the clutter and disorder in their home would not pass muster with the adoption oversight agency.  So, they made up their minds that it was time to finally declutter in order to make room for a new child in their home and in their hearts.  It took most of one summer of decluttering and cleaning to bring the house up to adoption-worthy standards, but they did pass the test.  The adoption agency came to inspect, and they passed inspection with flying colors. Soon, they welcomed a new little daughter into their decluttered home to live life with them.

The clutter had almost won, but they made up their minds that they were going to win the war against clutter. Soon they were able to expand their family and make new memories, to boot.

The bottom line:   Ask yourself, “What kind of life do I want to live, and what is hindering me from living it?”  If your answer to the second part of the question is clutter, then it’s time to go to war against the enemy.  Clutter will derail your life dreams and goals both in the office and in the home.

The life you want to live is waiting for you to make the next step.

Decluttering is that next step.

It’s time to go forward.  Let’s do this!