You are here: Home / Organize Your Office / Instead of saying “I don’t have time to organize,” say “I organize to save time.” 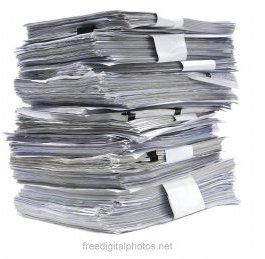 Here is a classic story about faulty thinking. I was in Indiana working at a corporation. Upon entering my client’s office to start the hands-on coaching session, I noticed a three-foot pile of neatly stacked papers in the corner by the door. He said it was a month-high stack of daily reports that he referred to 6-7 times a day. He liked the stack because it was easy to find what he needed when he needed it.

When I asked him to find a specific report, it took him about three minutes. He was appalled. So I told him to multiply 3 min. x 7 times a day, which equaled 20 minutes going through his work to get to his work. So I suggested that we organize a simple system so he could access any report in seconds.

Maybe you can guess what he said — “I don’t have time to organize.”

After a little encouragement, my client finally relented. We spent about 20 minutes setting up his system, roughly the same amount of time he was wasting each day. Here’s what we did: we used 31 hanging files numbered 1-31 and placed each report in its corresponding number. The March 3 report went into the number 3 file, and so on. Now, finding any report takes him about three seconds — the time needed to open the drawer and pull out the file.

But that’s not the end of the story. Three or four coworkers also repeatedly entered his office and used his “neatly stacked papers” each day.  Here’s how the math stacks up: 3 men x 20 min. a day x 5 days a week = 5 hours per week.

Bottom line? An investment of organizing for 20 minutes saved his company over 20 hours a month in wasted time and effort.

So the next time you’re tempted to say, “I don’t have time to organize!” remember, you organize to save time.